Knowing in our hearts that it would be impossible for our little dog Zoey to survive the -21 degree temperatures, our hope was that someone picked her up and decided to keep her. After 3 subzero nights, that was the only scenario we could live with.

On Friday, January 16th, 2016, amidst one of the coldest and snowest winters on record, Roger and I were on our way from Alpine, WY to Jackson, WY to stock up on food and supplies. The week ahead was to be treacherous. When we stopped for gas at the Alpine Junction Chevron station, neither of us noticed that our 2-year old little Morkie had jumped out of the car. It was only 20 miles up the canyon that we realized that she was not in the back, as we had expected, but that she must still be at the gas station.

In a panic we called the Chevron station. “Yes, she said, “we saw a little dog running around the parking lot.” Please bring her in.” I pleaded. “We are on our way!” We quickly made our way back down the icy canyon road to rescue our Zoey. Our hearts sank when we arrived and she was nowhere to be found. We called, searched, drove, walked and hiked for 4 ½ hours. Asking anyone and everyone if they had seen her. People were kind and sympathetic, offering to “keep an eye out” and “spread the word” and “pray for her.”

Surely someone has picked her up. But why haven’t they called? She had a tag on with her name and my phone. We called the vet, the sheriff’s office and Lucky’s Place, the local humane society.  All were kind and sympathetic, but I could hear in their voices that at this point, it was likely that we would never see her again. And with the temperatures, well…

Our desperate prayers were pleas for help that she would be safe and if not, that our hearts would be healed from the loss.

By Saturday afternoon, the hard truth began to set in. There was no possible way she could have survived the night and if someone had her, surely, they would have called us by now. With each passing hour, the prospects grew dimmer. Saturday passed into Sunday and we began to feel the emptiness. 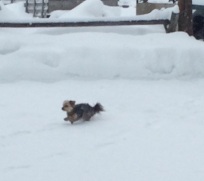 On Monday, beyond all comprehension, and in disbelief we received a call from an awesome family that Zoey had been found! They had seen her running through their field and assumed that she had found shelter under their shed. She was wet, cold and scared and would not come to them or let them catch her. She just kept running. They took photos and tried to zoom in to see if they could read her tag, but to no avail.

This great little family, The Dales, went above and beyond to rescue her. Adam & Gretchen put out a wild animal trap with some food on Sunday night. 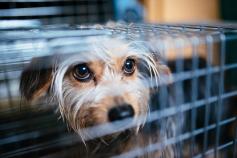 They caught her on Monday morning and brought her in to warm her up and called us. We, of course dropped everything and through roads were closed, schools had been shut down and the county was calling for no unnecessary travel, we went to pick up our Zoey. She was about 1 mile north of the Alpine Junction where we left her. Safe, but frozen, exhausted, hungry and thirsty.

Today, she is bundled up on the sofa with her little toy lamb, warm, fed and loved more than ever. Words cannot express how grateful we are for the power of prayer and for this kind family who knew how much this little dog needed help. They refused our reward asking us to pay the kindness forward.  What a great lesson they have taught their two daughters, Juniper and Hazel. Thank you for your example of goodness and caring.

As I close this remarkable story, may I share with you a poem that I learned when I was little. “All creatures great and small, the good Lord watches over all.” Indeed! And please enjoy this song that has been playing in my head this morning. Consider the Lilies of the Field. We are beyond grateful. May we show our gratitude and do as the Dale’s asked and pay it forward at every opportunity.