Whatever It Takes! (or going out on a limb)

One of my favorite walking routes is to follow a dirt road next to a canal. The canal flows between residential backyards and farmland and I always enjoy seeing the animals and watching the farmers as they tend to their early morning chores. One Saturday, I stopped along the way to admire a beautiful tree loaded with hundreds of perfectly ripe, delicious apricots. The tree had grown over the canal and there appeared to be no way to reach them. Apricots are one of my favorite foods and I knew I just had to find a way. As I surveyed the situation, a fellow canal road walker stopped to chat with me about her experience trying to pick some of these un-reachable, but oh so desirable apricots. She said wading into the canal was not a good choice. Apparently, she got stuck in the mud at the bottom of the canal and decided it was just not worth it.

All the way home, I discovered that I indeed, wanted them badly enough to find a way. The words of my BSCI partner Janean Hall, came to me – “What’s another way?” The minute I walked in the door, I told my husband Roger about my plan. I would put a plank over the canal, walk out onto it and reap my rewards. He looked at me as if to say, “You’re an idiot” but just smiled and said that he did not think I could heave a board all the way to the other side. We might be able to use the extension ladder, he suggested! That is what we will do. So we loaded up the ladder and off to the canal we went. My daughter, 9 months pregnant and her daughter 4 were amused to say the least, and decided to join us on this adventure.

Roger surveyed the situation and decided that the ladder would not work either. He suggested that the only way would be a raft. A ha! Brilliant! Why didn’t I think of that? A float tube would do just fine. So back to the house we hurried as if someone else would claim our prize before we could return. But alas, success! My granddaughter Baylee and I floated down the canal until we reached the apricot tree. I grabbed a limb and we started picking apricots by the armloads – we would fill our bags and they would reel us back to the shore to offload our take and back again for more. What fun!

Many of our neighborhood friends have mentioned how they, too admired the apricots. And one said he wondered what had happened to them. One day they were there and the next day they were gone. Hmm, like magic – yeah right!

In life, whatever ‘it’ is for you, you must want it badly enough to do those things that others are not willing to do. You must be willing find another way when your first, second and third attempts fail. It takes courage, creativity and sometimes a little insanity to reach further, dream bigger and aspire higher in order to reap life’s greatest rewards. And sometimes it is not what we are thinking. The true reward here was not really the apricots – it was having bread and jam on the porch swing. 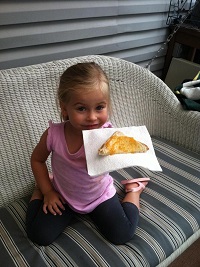